This event is hosted by the UCLA Voting Rights Project, UCLA Latino Policy and Politics Initiative, and the Luskin School of Public Affairs. Keynote speakers including California Secretary of State Alex Padilla, Rhode Island Secretary of State Nellie Gorbea, and Congressman Marc Veasey. Secretary Padilla has increased voter registration, overseen the transition from the traditional voting model to vote centers through the Voter’s Choice Act, and has strengthened voting rights in California. Secretary Gorbea was elected by the people of Rhode Island in 2015  and has worked to pass automatic voter registration. Since she has been Secretary of State, there has been a 64% percent increase in voters 18 to 20 in voting in general elections. Congressman Veasey has represented Texas’ 33rd district since 2012 and founded the first Congressional Voting Rights Caucus. 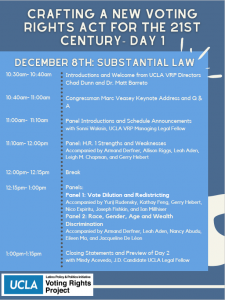 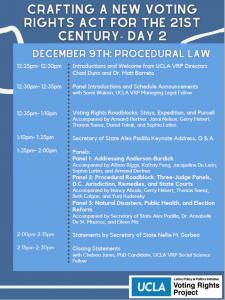